The Lion is a common aggresive animal found on most islands in varying abundance based on chosen difficulty and/or the map maker's discretion. Though many will be distributed randomly throughout a generated map, they can only respawn naturally near a Lion Stone (a medium-sized rock piled with bones and meat). Lions will provide 4 claws, 4 teeth, 2 hides, and 2 large meat when killed.

Lions will prowl around in circles relatively close to their spawn point and constantly scan for the player's presence. When the player walks within range, the lion will immediately lock on and chase the player. Lions will make no attempt to path around or over objects when chasing the player and can thus get stuck behind large trees and rocks, making them easy to kill or escape.

If the player attacks them from afar, they will briefly move towards the source of the projectile-- after a brief chase, if the player is still out of range, the lion will return to its innate behavior. Further, due to the lion using the same behavior as the Raptor, lions will eat pieces of small and large meat if they linger close enough to them or said item is thrown at them. Unlike raptors, however, lions cannot be tamed in this way, and the food is thus wasted.

Lions have a decent amount of health, average speed, and enough attack damage to make it a tough creature to take down. When attacking the player, lions have a chance to inflict Bleeding status, a very dangerous wound which will continually damage you until you either apply a Blueblossom or craft a Bandage.

If a lion begins chasing you and you are ill-prepared, it is best to immediately run in the other direction-- the player is about as fast as the lion, so any obstacles you can put in the way between you and the lion should be enough to escape its pursuit. If that is not an option, you may always jump into the nearest body of water, a few meters away from the shore. Lions will immediately lose interest in you if you are far enough in water and will return to their original spawn positions.

It is not recommended to engage a lion without a ranged weapon like a Bow or a Spear-- a slingshot deals little damage and engaging in melee with the lion is risky. Lions have limited ability to climb or jump over obstacles, so it is to your advantage to curl around large trees and stand on top of tall rock formations when attempting to kill one with ranged weapons.

If you are feeling brave, a Machete is a sufficient melee weapon to bring one down if you are careful. Your primary advantage in melee combat is that your swing is slightly longer ranged than its bite. Because its movement speed is identical to your own, you can allow it to close within your melee range and then carefully backstep while swinging to bring it down. You should survey the area carefully before attempting this, however-- bumping into any obstacle, like a tree or a rock, could quickly result in taking significant damage. 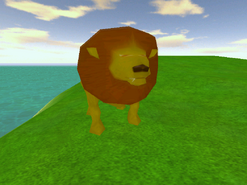 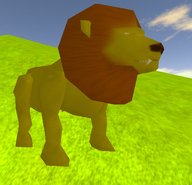