The picklock is a tool that has no use at it's base, but can be used to unlock objects that have been locked via the editor. Using the picklock on a locked object will bring up the lockpicking menu, where you'll be required to input a series of directions using the clickable arrows. If you enter an incorrect direction, you'll be required to begin again at the start of the sequence until you can input the entire sequence correctly. The directions available for the player to click range from four to one, with the difficulty usually being dependent on how many clickable directions there are. When you do input the entire sequence, you'll be given access to the items in the storage and you won't have to unlock the object again. The picklock is a very useful item to have in user-created maps to unlock secrets or create a little bit of extra challenge.

"a picklock which can be used to crack locks"

"Use the object you want to open!" 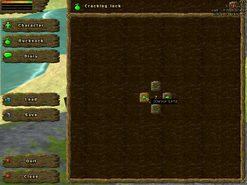